What good are bitcoins if you can’t show them off? I can’t wear a bitcoin chain around my neck or a bitcoin watch on my wrist. Nor can I hang a bitcoin on the wall. And because bitcoins are highly divisible and fungible they make for poor collectibles. I can’t possibly complete my bitcoin collection or impress people with the story of a specific bitcoin’s particular place in history or what makes it different from the other bitcoins out there.

These limitations are one reason why bitcoin is a peculiar store of value.

We typically think gold is expensive because people value it as jewelry, that original works of art are valued for their beauty and their place in history or the oeuvre of an artist. People collect old coins because they find them beautiful or fascinating and because they are driven by the human instinct to collect things that are rare and meaningful in some way.

It seems to be the aesthetic, historical, cultural features of these kinds of objects, together with their rarity and the human drive to collect that give them their value. But bitcoin doesn’t seem to have such qualities. Nor are bitcoins backed by governments or central banks who can create a demand for them the way they do with regular money. Bitcoins also don't provide returns in the way stocks do.

So if not through these properties, institutions or returns, how could bitcoins have become so valuable? Is bitcoin just in a big bubble that will inevitably pop?

In this article I first argue - much in agreement with Moldbug's Bubble Theory of Money - that while it is true that bitcoin is in a big speculative bubble, it is a sustainable one.

And secondly, contrary to how we usually think about them, most of the value of the objects I mentioned above - gold, fine wines, works of art etc - is also bubbly.

Bitcoin is special only in that it is an extreme case of the same bubble mechanism. While much of the price of original works of art, fine wines and gold can be explained by this bubble-blowing mechanism these objects do also have some consumption value. Bitcoin's value on the other hand is nothing but bubble. The same principle holds for other cryptocurrencies such as Ethereum. 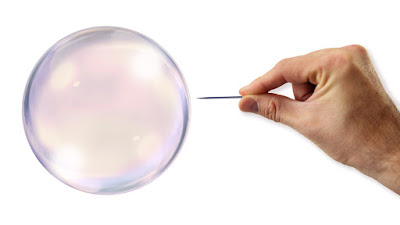